It’s fair to say that Mr Darcy sits atop the pile of Jane Austen’s male characters, despite the valiant efforts of Henry Tilney (boosted by his understanding of muslins). But it’s not a subject I have given much thought to.

But I was asked recently about my views on Jane Austen’s female characters. Lizzy or Jane? Catherine or Isabella? Fanny or Mary?

So here are my purely subjective, non-scholarly top 5 rankings (in reverse order): 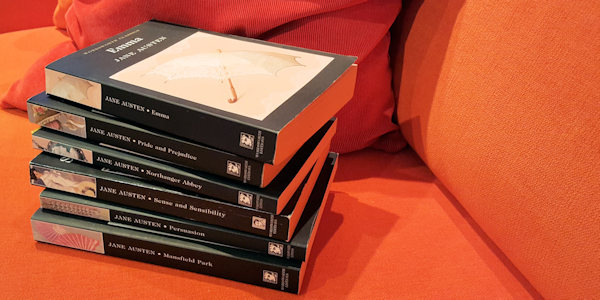 I can imagine the hand-wringing now. Not Jane! Not that softie: so shy and impossibly naïve!

“Oh! you are a great deal too apt, you know, to like people in general. You never see a fault in anybody. All the world are good and agreeable in your eyes. I never heard you speak ill of a human being in your life.”

It is exactly that which endears her to me.

The world has plenty of cynics and realists; we also need the occasional optimist. It takes a certain kind of strength to persist in looking for the good in people, always willing to give even the worst rascal another chance. And in her good-naturedness, her willingness to see the positive in people and actions, those around her hopefully feel some degree of pressure to justify her good opinion.

And, frankly, she was right about Mr Darcy.

If the knives are out for the selection of Jane Bennet, then they will be sharpened for Emma: arrogant, interfering, at times thoughtlessly unkind.

As Mr Knightley points out:

Ah, but one of the rarest human qualities is to recognise your faults and an even rarer one is to change for the better. Darcy’s self-awareness and desire to improve his character, inspired by Elizabeth’s rejection, underpin his popularity with readers. Emma goes through a similar transformation.

Yes, the sensible one. The one whose daring expression of affection is:

“…I think very highly of him—that I greatly esteem, that I like him.”

Goodness, be still my beating heart at such a proclamation!

So why my number three? For her self-sacrifice, and for that glorious moment when the mask slips and reveals the pain of putting honour, duty and obligation to others above her own needs:

“For four months, Marianne, I have had all this hanging on my mind, without being at liberty to speak of it to a single creature…I have had her hopes and exultation to listen to again and again….I have had to contend against the unkindness of his sister, and the insolence of his mother; and have suffered the punishment of an attachment, without enjoying its advantages…If you can think me capable of ever feeling—surely you may suppose that I have suffered NOW…”

Intelligent, witty, and willing to stand up to her mother, Lady Catherine, Mr Darcy, the Bingley sisters, Mr Collins, society’s expectations and even the threat of muddy petticoats. She doesn’t mince her words:

“From the very beginning—from the first moment, I may almost say—of my acquaintance with you, your manners, impressing me with the fullest belief of your arrogance, your conceit, and your selfish disdain of the feelings of others, were such as to form the groundwork of disapprobation on which succeeding events have built so immovable a dislike; and I had not known you a month before I felt that you were the last man in the world whom I could ever be prevailed on to marry.”

And I admire anyone willing to change their opinions based on new experience and information. It’s another rare ability.

Another who puts other’s needs before her own, hiding her frustration and disappointment (echoes of Elinor), yet finding the strength to remain constant – and then that little spark of defiance when she challenges Captain Harville’s accusation regarding the fickleness of women:

“Yes, yes, if you please, no reference to examples in books. Men have had every advantage of us in telling their own story.”

Which she follows with the words that trigger Captain Wentworth’s letter:

“All the privilege I claim for my own sex (it is not a very enviable one; you need not covet it), is that of loving longest, when existence or when hope is gone.”

But really I can’t put my finger on why I like her most. I suspect it’s simply the idea that the “ordinary” and unobtrusive protagonist is entitled to a happy ending, too. Hope for us all, even if we don’t have Elizabeth’s spirit or Darcy’s brooding vulnerability.

What do you think?